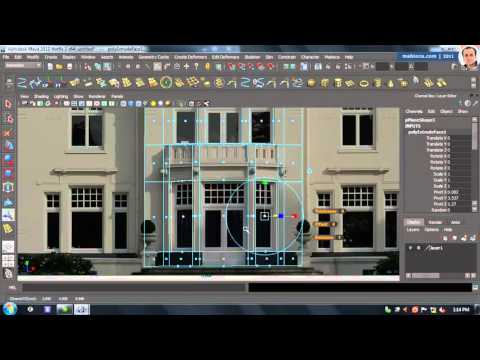 1. Box modelling – with this type, the artist uses a geometric shape such as a cube or a cylinder and shapes them until it resembles the desired shape. This process is carried out in various stages. The procedure begins with a low resolution mesh which is then refined into shape. The mesh is then subdivided to ensure that the edges are smoothened and then the necessary detail is added. This process is continued until there is enough polygonal detail present in the mesh. This is one of the most common types of modelling and is used together with edge modelling techniques.

2. Contour modelling – this is another type of polygonal modelling technique used but it is not the same as box modelling. The modellers develop the model piece by piece instead of defining an original shape. This is done by placing various polygon loops along the outlines and then filling all the in between gaps.

3. Spline modelling – this type of modelling is used in the industrial and automotive modelling processes. The NURBS mesh which is used, does not have any edges or face. These models tend to come with edges that can be constructed smoothly. The modellers are able to develop the concept by hitting a mesh between the splines. The curves of NURBS mesh can be developed using a tool which looks similar to a pen tool in Adobe Photoshop. The 3D modellers draw the curve in the 3D space and thereafter it can be edited by moving the control vertices. Curves are placed along conspicuous outlines and the software will automatically interpolate the space between them. This is one of the most commonly used 3D model design techniques that is used to design objects like vases, plates, etc.

4. Sub-division modelling – this is created by mixing the polygonal modelling and NURBS modelling techniques. In this process, 3D models are created using a polygon model which is then converted to a sub-division model. The artist assumes total control of the refinement of the 3D model in particular areas. This model is also easily transferrable between various software.

5. Digital sculpting – These 3D modelling processes have been integrated by the tech industry. They are known as disruptive technologies. Experts use advanced 3D modelling software to develop these models and is not only used by the automotive industry but also for product development and marketing strategies. The modellers carry out this 3D models in a similar way to sculpting digital clay.

6. Procedural modelling – these refer to the designs generated algorithmically and they are not manually created by the artist. The objects and scenes are developed on the basis of user defined rules. Modellers design entire landscapes by changing the parameters such as foliage density. This type of modelling is used extensively in organic objects such as foliage and trees where it is rather complex. The models are not easy to draw by hand and the objects are further manipulated by using various editable settings.

7. Image based modelling – these 3D objects are derived algorithmically from a set of 2D images that are static. It is used when there is a budget constraint or a timeline. They are not able to fully develop into 3D

8. Surface modelling – this helps to create a 3D spline. The process involves a 2D spline and its difference from NURBS. It is mainly used to generate organic 3D models in films. Modellers can efficiently create a 3D representation with many different requirements, using geometric objects like curves or surfaces.

It is plain to see that the advanced 3D modelling techniques are being utilised by various industries, and companies are teaming up with the well-known service providers for dedicated support. 3D modelling is an excellent career path especially if you are created and have a passion for not only using your hands but various important software.

Tips For Entrepreneurs Moving Their Data To The Private Cloud

How Has The Cloud Changed Supply Chain Management