When you first start playing a game what do youvaluethemostabouttheexperience? Is it the story? Maybe you just like being whisked along for the ride. Is it the freedom to play exactly as you want? Or, if it’s a multiplayer game, is it the player interaction which you really crave? Game developers know that players instinctively ask themselves this question whenever they are looking for a new game to purchase – “What do I want my game to be?” – so you can bet your bottom dollar that they have that in mind when they are developing their new titles.

This focus upon pinpointing an audience has lead to a number of noticeable categories emerging which distinguish one game from another. In Massively Multiplayer Online (MMO) games these distinctions can be expressed (rather pleasingly) by three major categories: The Sandbox, The Themepark and, more recently, The Zoo.

A Sandbox game is, at its heart, player driven. You jump into the game, grip your sword tight, fasten your leather belt of warding and head out into the world looking for adventure. What yougetup to is largely up to you, you make your own stories and carve your own path. You can hop into the Sandbox, play with the sand, throw your bucket around for a bit and then pee in the corner if yousowish.An example of a Sandbox game would be EVE Online. In EVE, the developers have given the players a space (literally) and the mechanics to play with, and it is up to them to decide how they play it – admittedly this mostly ends up with ruthless backstabbing, robbery and murder.The advantage of this, of course, is that there is a certain pleasure to be obtained through triumphing through nothing but your own grit and determination. The obvious con is that without a certain amount of hand-holding, it is easy for the average player to stray from the beaten path and find themselves naked on a pirate ship manned by scimitar-wielding ferrets before they can even utter “Parle.”

In contrast, a Themepark game is heavily developer-driven. Players drop into the game and are given numerous quests, adventures and monsters to slay, monster spawns are often more fixed and predictable and the quests have a set path to follow. The developer controls the experience from start to finish. Once you enter the Themepark you’re restricted to the rides which the developer has produced for you; once you jump on a ride, you had better not think about trying to get off the rails, unless you want to be flung from a moving cart at 90mph.

A prime example of a Themepark game would be World of Warcraft. In WoW, you have quests, repeatable instances and enough content to fill several lifetimes. The content itself is of the highest quality, but players don’t have a lot of chance to go “off the rails.” Once they start a quest, if they want to play it through to completion then the players are pretty much restricted to the process that Blizzard has set out ahead of them.

Whilst this might sound a little boring, the advantage is that the developer can ensure that the quality of the experience is very high from the moment they pick up the quest, till the moment they cash in their reward, and that each interaction the player has with the game is finely tuned to the maximum. However, the disadvantage is that once you have played the content through and seen all that the developer has set out to show you, it’s pretty much over until more content is released – there is little replayability.

A Zoo game kind of snuggles in nicely between the two extremes. Whilst a large majority of the content is developer driven, the content is dynamic and changes each time it is experienced depending upon player interaction, context and a number of other factors. Much like a Themepark, if you walk into a Zoo, all the content is there for you to see – the lions, tigers, monkeys and three toed sloths. Ravious @ Kill Ten Rats puts it succinctly in saying:

“In a theme park, the rides, show times, and games are all set, but at a zoo the tigers might be napping while the monkeys are doing it next door. Things are especially interesting if a zoo visitor happens upon feeding time.”

The concept of a Zoo game is a relatively new one, having been brought about by the introduction of “dynamic content” by games such as Rift and the upcoming Guild Wars 2. Dynamic content means that in-game events change depending upon a number of factors and some content is governed totally by randomness (such as the appearances of Rifts in… Rift).

The advantage of this approach is that, in theory, a player’s experience should differ every time they log in; it keeps the content fresh and exciting. The drawback of the Zoo model is that it almost seems like it’s a faux-sandbox game. If not done correctly, it seems to say to players “we wanted to make a true sandbox game, but got a little scared – so here’s some seemingly random quests with veiled ‘on rails’ content.”

Ultimately, it’s up to players to work out where they want to fall when it comes to their gaming experience. I can’t help but feel we will begin to see truly Themepark games being phased out of the MMO scene (although, I imagine they will still thrive in the single player market) as players hanker for more realistic and varied experiences.

The MMO community is losing faith in developers who fall back on the Themepark design, but the problem is that players have been conditioned by the reward based gameplay mechanics which make up the most successful Themepark MMOs. Complete quest, gain reward, complete quest, gain reward – this cycle has largely replaced the multiplayer driven aspects upon which early MMOs were built and a number of prominent voices think this can only be a bad sign.

It is yet to be seen whether the Zoo model can bring player collaboration back to the centre of the MMO genre, but games such as Rift, Guild Wars 2 and other so called “next gen” MMOs are certainly re-evaluating the quest based “on rails” content upon which the past few years have been focused. It will be interesting to see whether these new games can not only grab those players who are looking for a fresh start with the MMO genre, but also those stoic few who hold onto damage per second counters, quest based storylines and other typically Themepark features. 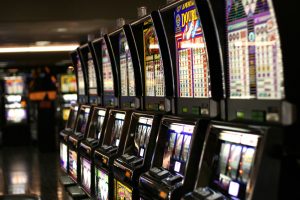 The Fascinating History of Slot Games

The Future of Gaming Industry – Top 5 Emerging Trends in 2019

New Game Titles Everyone Will Want